Some stories of PayPal users that lost money

We collected a bunch of stories where former PayPal users lost money in terms of “Acceptable Use Of Policy”:

So @PayPal @AskPayPal froze my account last year and said i could access my money in 180 days. Well they straight up stole the money!!!! Money out of my account. 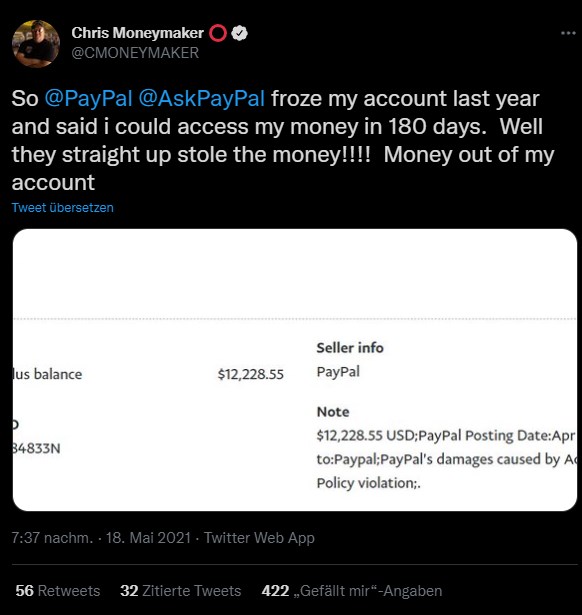 “Somebody has to stand up to these guys,” Moneymaker said. “I’m going to continue to use my status and my social media channels to expose these immoral and illegal practices and ask others to join my lawsuit against PayPal.”

I have had an AWFUL experience with PayPal that cost me $20,000 USD. I would like to share my story to spread awareness and to connect with any other PayPal users that may have had a similarly awful experience.
Back on July 31st, 2020 ( 285 days ago) I received a notification from PayPal stating that my account got permanently closed and my funds ( $19,947.03 USD ) will be placed on a 180-day hold.
On February 16, 2021, I emailed a PayPal referral explaining that the hold on my money surpassed 180 days.
On March 29, 2021, at 04:45 PM I received the following message from PayPal:
PayPal User Agreement explicitly states that sellers who violate our Acceptable Use Policy may be liable for damages up to $2,500 USD per violation. These violations may include the sale of prohibited Adult or Offensive Content, Drugs, Counterfeit Goods, etc. We have dedicated teams and robust internal processes to ensure adherence to our policy, and the company may look to recover damages from sellers who have broken our agreement.
The balance of $19,947.03 has been removed from your account permanently.”
I have received the same script over and over and over again. Not one employee at PayPal was prepared to give me answers to my questions or elaborate on what EXACTLY they claim I violated. HOW can this be legal?????

Please share my story and help spread awareness. If this could happen to me, it could very easily happen to others. PayPal problem perfect solution and PayPal account creation do not care about us as individuals. They completely took advantage of me during the toughest year (2020), when things were already insanely tough 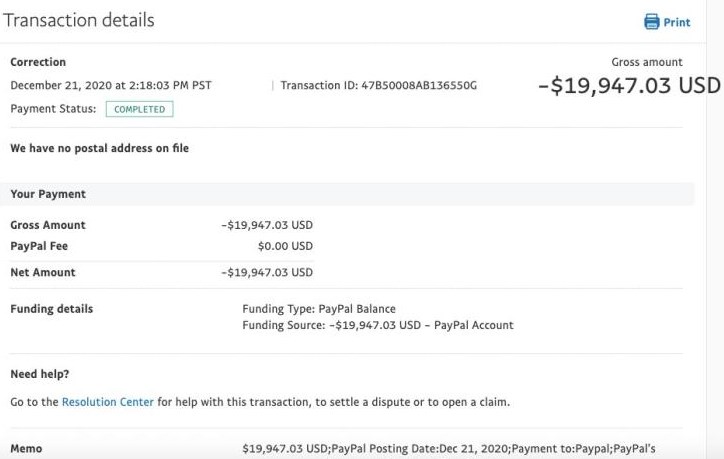 I figured I should post this now before I have to sign anything that says I won’t discuss this anymore.

I have a website that sells ADULT products. We opened our first account with PayPal in 2001. With over a million dollars a year in sales, we certainly made them a lot of money on the payment processing side over the years.

The saga began in 2019 when we received an email asking us for some business documentation. Our account was limited pending the review of those documents according to the email. A week later we got a notice from PayPal that our account had been limited and that all the funds accrued in the past two weeks ($18,000usd) would be frozen for 180 days due to a violation of their AUP.

We were left high and dry with no payment processor, it took almost a month for us to get a high risk processor on boarded and man that was a tough month.

We filed a complaint with the better business bureau. The BBB reached out to PayPal and they replied saying that since we violated the TOU, and that they were susceptible to chargebacks, they would have to retain all of the funds for 180 days and then we would get them released to us. The BBB accepted this explanation and closed the complaint.

Fast forward 180 days. I log into my account. Shows a balance of zero. 0 USD. Nada nothing no money at all.

It looks like on day 179 of the waiting period PayPal deducted the full $18,000 amount as damages. The memo line literally says “assessed damages against PayPal”. And shows the transfer of my funds to PayPal. I guess they decided to just steal my cash. Well, as you can imagine, that just didn’t sit very well with me.

Researching my options, I figured I could either take them to small claims for 10K of the funds. take them to arbitration if I could manage it, or hire a lawyer and sue them in court.

having paid plenty for lawyers in the past, I know that their bill can get very high. You can spend 20 grand with a lawyer just getting it to trial, so that route was not very palatable to me. Small claims was a better option, however the limitation of $10,000 here in my state meant that even if I won I would only get about half of what they owed me.

Tried to get ahold of people within PayPal to move it forward into some kind of arbitration and had absolutely zero luck.

Found a company called FAIR SHAKE they said they could get me into arbitration, and would take 20% of anything that I settled for. they emphasized that they are not legal counsel and could not advise me or help me with the arbitration itself, however they could move I claim along and get it into a position where I could argue my case in a arbitration court.

They were true to their word. It took about 90 days but eventually I received an email saying that I would be entering into arbitration in the next 10 days unless I could reach a resolution with PayPal’s legal department. I was then contacted by their attorney who offered me… Are you ready…? 600 bucks.

I reached back out to Fair shake, they said there really wasn’t anything they could do except get me to this point. It couldn’t offer legal advice or assist in the negotiation so I went to battle.

Their attorney argued that if I didn’t accept the offer they would pursue charges against me for every other violation of TOU literally hundreds of them as they saw it and ask the courts to award them for even more damages. Totally a scare tactic, I wasn’t worried.

We went back and forth over some details and eventually they offered me… $1,900

Over the course of the following week and many detailed emails I argued that if I were to present the documentation from PayPal’s representatives in court the judge or arbitrator would certainly see a small business being abused by the deceptive and owner’s practices of a large company with a reputation for this sort of practice. That all of their posturing and threats regarding further charges were just more evidence of their abusive attitude and that this was a cut and dry matter. They said in writing I would get my money in 180 days they didn’t mention anything about damages in any email. When the BBB claim was opened their reply was again that I would receive my money in 180 days and that they had to hold it as surety against chargebacks. The BBB used this assertion to close their claim.

Back and forth until I told them that if the negotiation took until the end of the day I would take this matter to court to see justice served regardless of the outcome. I told him that in the interest of Goodwill and my intention to settle this, I was willing to accept $16,000 But that we needed to put it to bed by the end of the day because this was literally the end of the line for me.

And they caved. 16 grand headed back to my checking account.

The moral of the story. File with the better business bureau. Make sure to document everything take screenshots. When they assert that they will return your funds use that later as evidence against them in case they seize your money.

If you cannot get into arbitration on your own it’s worth signing on with fair shake. Totally worth 20% for getting me to this point. But do not expect any deals when you get there.

I made tiny concessions along the way, 50 bucks a hundred bucks another hundred bucks basically thinking that if this ended up in court I could demonstrate that I tried hard to come to a resolution and that all they wanted to do was bully and deceive.

And I got a ton of my money back. I hope this gives you hope if you’re reading this and you are in the position I was a year and a half ago.

Jenifer – PayPal Is NOT Returning USD 40,000 they kept for 180 Days After account suspension

After my account was frozen, PayPal has taken the entire money frozen in my account. No communication and no emails about the money stolen. When I enquired – I got an auto-generated email

NO explanation given, no emails sent. The amount is GONE……..

Have any of you gone through this?

And even more users claim, PayPal deducted money from their accounts. 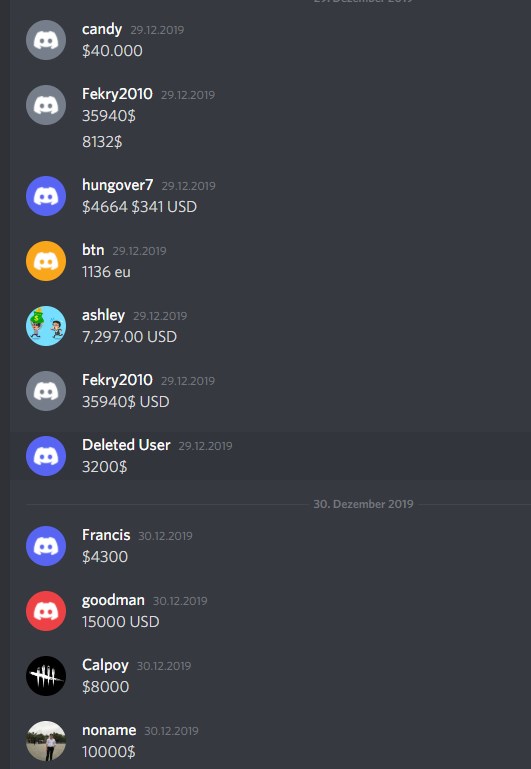 Join the Discord for more info

Need help filing a complaint? Our Discord group is there to help you easily.